A Different Kind of Racing

Part One:
On a recent trip to PDX (Portland) I was invited to experience sailboat racing as it is done on the Columbia River. Oh what a difference!! Since it is the season of snow melt and this has been a banner year for that sort of thing there was about a 3 to 5 knot current blasting its way toward the ocean. It is not at flood stage or anything even close to that but it is a strong current of very chilled water. When I see the Columbia through my Arizona eyes I see all the water available in Arizona for a year pass by in about 10 minutes. It’s a lot of water! Generally the wind on the river is from the north to northwest and the racers take full advantage of this. The course is set up with alternatives and each fleet tends to have about a dozen or so boat in it. There are multiple starts and the race committee tries to set up a different course for each fleet. More on this in a minute. Overall, the length of the course is extremely short by TSC standards. 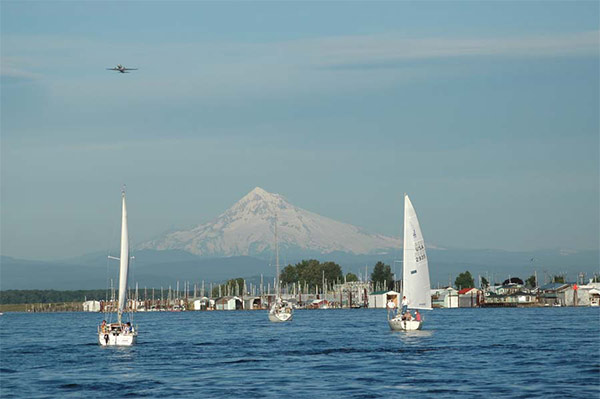 You couldn’t ask for better scenery

I was on a J-30 (Sugar Plum) flying a spinnaker and it was one of the last races for the owner with his seasoned crew (10 including myself) of many years acting in unison to bring the boat to the front of the pack. The word “smooth” came to mind as I watched the crew from the cabin top. My position was as rail meat when needed although I did find a few other jobs in between rolling from side to side under the boom.

At first you could mistake the activity of the race to be very much like the prestart for one of our races. The boats are milling about in whatever direction they want to go while awaiting the start sequence to begin. Then there is a rush toward the line and you realize that this IS different. Our fleet is one of the smallest, four boats, and since I am unfamiliar with the players, it took me a bit figure out which boats we are racing. We are headed toward the line down stream (and up wind) of our position with the bow pointed slightly upstream. When the Tactician and the Skipper agree they spin the nose toward the line and we scream past the committee boat just as the start signal goes off. This is the windward leg so we are nicely healed over blasting away and more or less aimed at the first bright orange mark. Going with the considerable current our speed over ground (SOG) is astounding! We get to the mark and as we round it the kite is already on its way up while the genoa is coming down. Now we are headed down wind and we need to avoid a (black) mark outward of the committee boat as other fleets are starting. Despite the current the J-30 is making considerable progress again and I begin to identify the other boats in our fleet. We had been first over the line and we are holding our position well on these first two legs.

Going upstream and downwind simultaneously is just plain different. It feels like you are going 30 knots when you look at the water because of the water rushing by and then it struck me that this course is really, really short compared to our 14 mile jaunts because we are at the downwind mark before I settle in. On rounding the mark the spinnaker comes down immediately and is sent below for repacking. The flurry and blur of the crew is truly amazing. We are once again headed down stream (up wind leg) and healed over more than before because we again have to avoid going inside of the marks adjacent to the committee boat. This course sets us toward the Washington side of the creek and the crew is very focused on their turning point to make the mark. There is a larger boat in the fleet that seems to be making progress against us and they are being watched very closely. Before you know it we are approaching the windward mark again and making the turn. The spinnaker goes up and we are careening through a bunch of boats in another fleet. Chaos ensues but it seems to be taken in stride by the Skipper and crew. Up stream to the mark again and then disaster strikes, we are in deep poop before we know it.

The spinnaker doesn’t slide smoothly down and there is a knot in the starboard sheet… that nobody sees immediately. By the time that is sorted out we have lost ground to the fleet and are running third or perhaps fourth. It is hard to find our competition at first because there are so many boats out there. Again before we know it we are at the other end of the course; the spinnaker goes up and we are headed to the finish line. Neck and neck with our closest competitor we finish and, perhaps, pull off a third. At this point I should say that it stays light in the northern latitudes a lot later than in Tucson. It is probably 20:30 and there is still light left for another round (this was in June with the longest day of the year approaching) but there are no more races started. The whole course was probably no more than a mile and half long from end to end so we could easily have done a second race. It took place near the PDX airport between the I-5 and the I-205 bridges. The J-30 is housed at Hayden Bay Yacht Basin so we sail away from there for a bit before we head in and there is considerable celebration onboard. What a good time for racing on a Tuesday evening!

One of the impressions that I had from all this was that the race committee had set the courses so that there was minimal interference between the fleets as they each went on their way. The courses had been preset and the buoys could be, essentially, laid out the same each time with the course being communicated to the fleets by way of a board posted on the check-in side of the committee boat (finish line – starboard – side). Each Skipper had only to check to see what the designation of the evening was to be (something like A through M, I think) and write the translation on the blue tape placed near the companionway. Let’s see, ours was a windward, leeward, windward, leeward, windward, finish course. Every crew member counted mark roundings out loud and thereby assured that the proper course was followed. Part Two: On the Thursday following the race boat activity I was invited aboard the committee boat to watch the race from a different vantage point. This was more than a hoot and a half.

It is worth mentioning too that on the way out to course our platform had been moored in a marina with the full current in it. It was exciting (as in; holy s**t!!!) to back the Ericson 33 out of the slip and jam it into full throttle forward to make it out to the exit by crabbing almost sideways down the fairway. 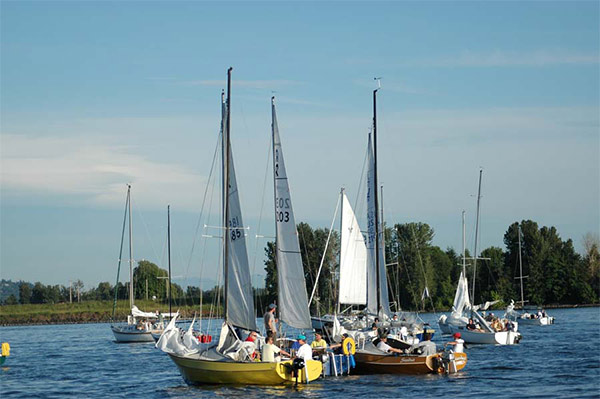 Rangers rafting up waiting for wind

The current was the same as the previous Tuesday but the wind was as close to nil as you can get. The opinion on the boat was that we would have to call a postponement and then after an hour of waiting for the wind to fill in cancel the racing for the evening. After a couple of tries we found the right place for the committee boat to station itself and I tossed out the anchor as we slipped backwards in the current. The chase boat set the marks and we waited for boats to show up and get ready for the race. There were lots of flags and a signal board to set up so the committee boat was a busy place for the first fifteen or twenty minutes on station. Then we just settled in to wait for the wind or the end of the day. As the boats came out they, of course, checked in and passed to starboard to see what their fleet’s course would be. We held up the postponement flag and waited some more. I began to notice that many of the boats motored around complaining that they were using a whole season’s fuel allotment and many eventually started throwing out their hooks and rafting up by fleets. There was a bit of friendly calling between the boats but there was not going to be a race. 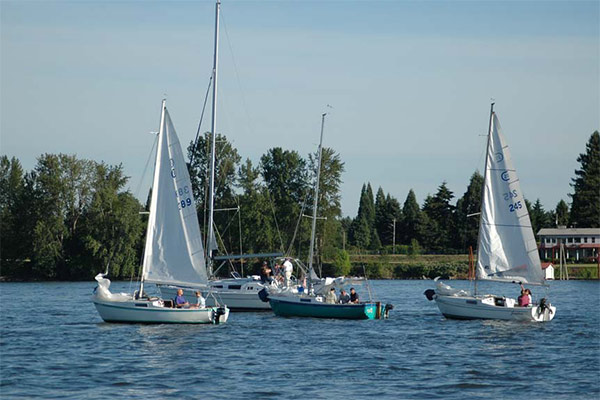 Some Cal 20’s with the hook out waiting around

Some excitement occurred when first one boat and then another ran over the lines securing the marker buoys. The first extracted itself after a short while but the second one took a very long time (probably a half an hour or so) with the chase boat and another sailboat to assist and finally the Skipper having to dive on the prop. Can you say, “brrrr”? Melted snow would not be my first choice for a dive site! The committee boat had a bit of excitement too when, as we were getting ready leave after calling the race, a large log came down the river and a snag at one end caught itself on our anchor rode! We fended off and finally flipped the snag off the rode as we kept the rest of the 12 foot piece of wood away from the hull. Then, there was the same crabbing into the fairway to get back into the slip. Overall I would have to say that current is something we should all be very happy not to contend with. 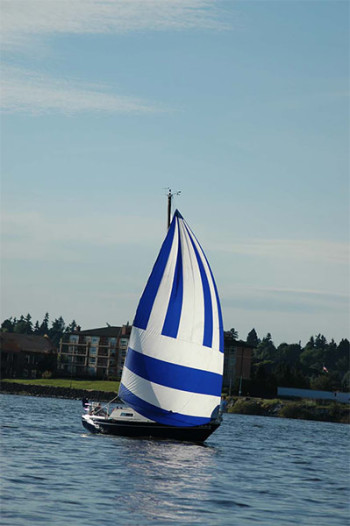 The Columbia River racers have lots of experience with all this but it was an eye opener for an Arizona boy used to lake and ocean sailing! There are lots of people there who learn the river early on in their sailing careers and local knowledge counts for a lot. On the sides of the river there are items called wing dams… these are poles placed in the water extending in a line from the shore to fend off large trees that can catch the unaware if you venture into the edges and are trapped there. There are some really shallow places (sand bars) that do not give much of a visual clue about the depth. There are bridges that need to be raised to allow you to pass without ripping your mast off. The barge traffic is fairly heavy there too and it is an every day occurrence that you hear the five terrifying blasts of their horns warning someone not to do something stupid (like cross in front of them). There are fishing boats drifting, mostly uncontrolled, down the river along with whole trees. So many things to contend with!

The next time you are in Portland you might consider going out to Hayden Island (Jantzen Beach exit off I-5) and asking around for a ride as crew for a week night race… it will do your soul good. 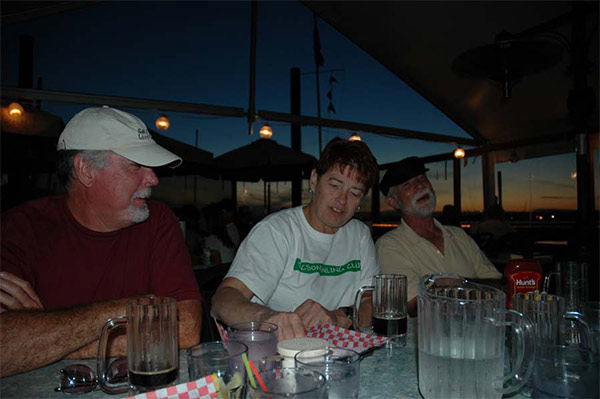 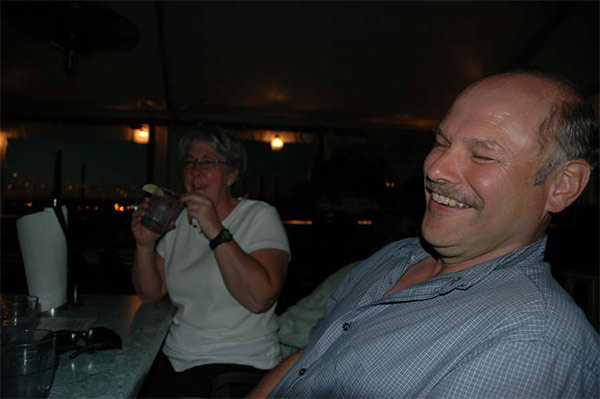 Patty Sherman and Michael Golden a few margaritas after the race