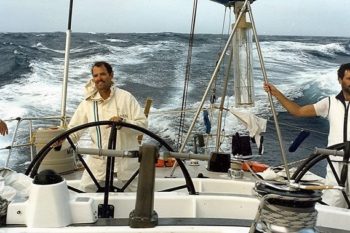 John Jourdane was our speaker for the June meeting.

3 circumnavigations including 2 Whitbread Round the World Races

Author of 3 books, “Icebergs, Port and Starboard,” and “Sailing With Scoundrels and Kings,” and “Modern Weather for Sailors.”

Voted the Best Racing Navigator in the world by Yachting Magazine, 1993