Three Weeks before the Mast

With tears welling in my eyes, I strolled down the dock toward my ship with my sea bag over my shoulder, just as sailors have done for hundreds of years. Of course, mine were tears of excitement and anticipation, whereas most of theirs were of fear and regret. I was joining the Europa, a 185-foot square-rigged bark as a passenger trainee for a sailing delivery from Las Palmas in the Grand Canary Islands to Salvador, Brazil. The crossing would take three weeks in October 2005 and include a visit from King Neptune while crossing the equator.

We boarded the ship in the late afternoon of the day before we were scheduled to sail. At a brief informal gathering with coffee and cookies, we met our fellow trainees and the professional crew. The Europa is a Dutch ship, so coffee and tea are available 24 hours a day. I later discovered that the bar is also open 24 hours a day, another advantage of sailing on a Dutch ship. 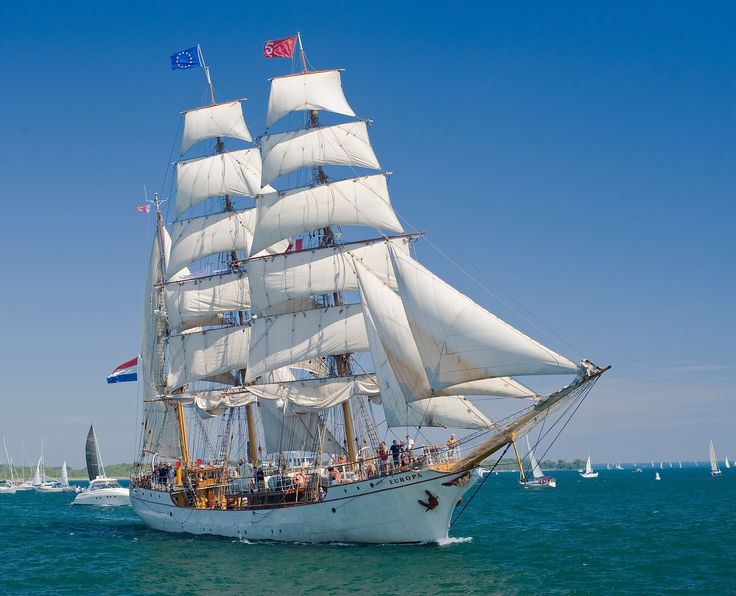 Our first night’s dinner consisted of a tasty fish-and-vegetable soup. Afterward we shared several beers in the main cabin. Throughout the trip, the meals were plain but usually very good and plentiful.

In the morning, the crew separated us into small groups for a tour of the ship and later training in climbing the rigging. We were supposed to leave in the morning. However, the Captain was having a difficult time with the Spanish authorities concerning one of his crew, so we didn’t leave until about two o’clock.

The first mate broke us into three watches–the Red, White, and Blue. He also assigned us to decks that we were to work when changing sails–the foredeck, main, and the poop (called the quarterdeck on English or U.S. ships). Fortunately, he put me in the latter, so I had fewer ropes (called lines on English or U.S. ships) to learn. A total of 185 ropes control the 30 sails on the Europa through a countless number of blocks tied off at 200 belaying pins.

As soon as we cleared the harbor, we were put to work raising the sails. At this point I discovered that it was nice to have some young strong backs around while we were “bracing the main yard.” A pod of dolphins joined us for about a half an hour, portending good luck for our voyage. At about four o’clock we settled into our watches, which would become the routine for the rest of the voyage–four hours on, eight hours off. There were also two dog watches (two-hour watches back to back) every day, so no one had watch at the same time each day.

Sometimes the crew gave us very specific instructions, such as “coil ropes like this” and “tie this rope to this pin”. At other times they were rather vague, giving information such as “it’s your turn at the wheel, here it is, your course is 210 degrees.” During each watch, I spent two half hours at the helm and two or three half hours on bow watch (bow watches are required by international law, at least during the evening hours). The rest of the time on watch, I would help the crew with sanding, painting, changing sails, splicing ropes, or even peeling potatoes.

After my first night at the helm, I was relieved to discover that I could steer the boat without tipping it over or running into anything. Believe it or not, there are a lot of things you can run into out there, including everything from huge tankers to 25-foot sailboats. By the way, for those of you who intend crossing: If you can’t afford to keep all of your running lights on all night, don’t go. Sailboats just don’t show up on a lot of radars, including the one on the Europa, and more than once we had to change course in the middle of the night to avoid hitting someone. Once we saw a sailboat running without lights, and if an experienced crewman hadn’t seen its sails reflected in the moonlight, there could have been a tragic sinking.

Speaking of night sailing, it’s impossible to describe the thrill of being alone at the helm of a square rigger with the only other person on deck being the bow watch, 185 feet away. Although the sunrises and sunsets were usually not as spectacular as those in Arizona, seeing the sun rise out of Africa, reflecting on the sails, was another unforgettable experience. Standing at the helm, steering the ship after a wind shift while the entire crew of 34 men and women hustled about changing the sails was also very exciting.

Standing at the helm in the middle of the night in the cold, wind, and rain, on the other hand, was romantic for only about the first five minutes. Then it became just cold and wet, and I couldn’t wait for my relief to show up. Of course, he or she would always oversleep in bad weather.

After a week, we made an unexpected stopover at Santa Maria on the island of Sal in the Cape Verde Islands off the coast of Africa. We did this because it was the home of one of the crew members whose time was up, and the Captain decided to drop him off on our way to South America. It meant that we all got a chance to be sailors going ashore in an exotic foreign port.

Early in the morning, the Captain smartly rounded the ship up in an open bay offshore, dropped the anchor, and back winded the sails, setting the hook without starting the motor–quite a feat with a 185-foot square rigger.

This Cape Verde island was anything but green. Instead it was flat, black, and barren. Once a protectorate of Portugal, the islands operate as their own independent country with their own currency. Poverty was everywhere. On one side of the broken-down wooden dock, rows of fancy European-style hotels lined the beach, while on the other, concrete hovels housed the natives. The Europa with her sails bunted up looked like a pirate ship anchored off shore.

I had a few beers, bought some African souvenirs (an experience which somewhat frightened me, since I was alone, and the peddlers were extremely aggressive). I ran out of money, as sailors often do ashore, and chose to return to the ship for dinner before we set sail. Back on board, I discovered that one of the trainees got robbed while sitting on the beach, another unromantic event that often plagued sailors of old.

We raised the anchor and set sail around midnight. The captain gave the trainees the night off and let the auto helm steer the boat until watches started at 8:00 AM. the next morning, a gesture that may have had more to do with not wanting to have a bunch of drunken sailors steering his ship than being generous to the night watches.